Cycles of crisis, migration and the formation of new political identities in Western Sahara 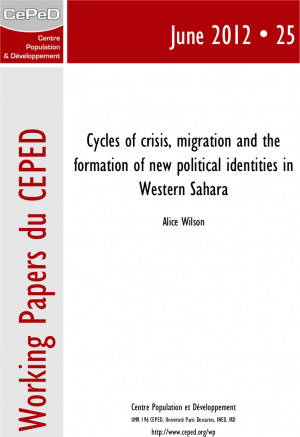 This paper considers how conjunctions of crisis and migration are productive in a Foucauldian sense. More specifically, it examines how cycles of crisis and migration are productive of new political identities. This is explored through the case of Sahrawis from the disputed territory of Western Sahara, many of whom live in exile in refugee camps in Algeria. The paper addresses how the conjunction of the crisis (from a Sahrawi nationalist perspective) of Morocco’s partial annexation of Western Sahara with the forced migration to Algeria helped produce the new political identity of Sahrawi citizens of the state-in-exile based in the refugee camps. It further argues that in the Sahrawi case, this is part of a longstanding pattern dating back to pre-colonial times, which sees conjunctions of crisis and migration linked to the formation of new political identities. These cycles continue today: recent developments in the conflict see the opposed parties, Morocco and Western Sahara’s liberation movement, Polisario Front, seek to manipulate the relationship between crisis, migration and new identities, sometimes with surprising results. The research is based on fieldwork in the refugee camps in 2007-2009, 2011 and 2012.

An earlier version of this paper was presented at the Journée d’études of Équipe 2, CEPED, on the theme of crisis and migration in the global south, held at the Université Paris Descartes on 9th December 2011.