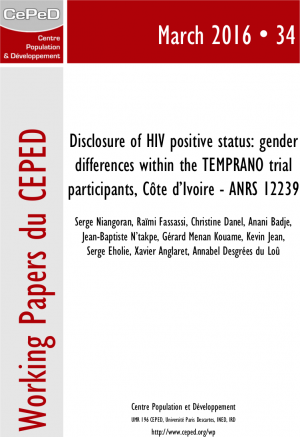 For people living with HIV, disclosure of HIV status is an important challenge : informed friends or family members can be supportive, or on the contrary can stigmatise the HIV-positive person. We aimed to compare HIV status disclosure among men and women, since gender relationships create different opportunities and difficulties for both sexes.

The study was conducted among HIV-positive adults enrolled in the TEMPRANO randomized trial in Côte d’Ivoire, which aims to compare very early antiretroviral treatment versus treatment initiation as per WHO current guidelines. All participants in this trial were asked questions on HIV status disclosure after 24 months of follow-up. Univariate and multivariate analyses were performed to compare disclosure patterns among men and women, disclosure to people living inside and/or outside the household, and in particular to the spouse or regular partner, and to identify the factors associated with disclosure.