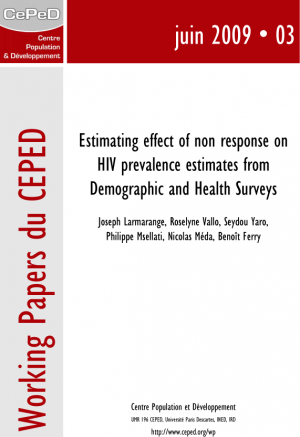 In most countries in Sub‐Saharan Africa, Demographic and Health Surveys (DHS) with HIV testing became the only measure of HIV prevalence in general population. Significant non response rates were often cited to explain differences between DHS results and estimations from sentinel surveillance in antenatal clinics. The objective of this paper consists to predict with multivariate models the prevalence of non tested persons in order to estimate the effect of non response on national HIV prevalence measure.

We used data from 9 DHS, conducted in sub‐Saharan Africa, where HIV results could be linked with data from household and individual questionnaires. Logistic regressions were performed for each country, separately for men and women 15‐49 years old, with a common set of predictor variables. For each group, adjusted prevalence was calculated by using observed prevalence for tested people and estimated probability to be HIV positive for non tested persons.

The overall effect of non response biases on national HIV estimates tends to be small and remains inferior to sample variations. If adjustments need to be interpreted with caution due to the limited information available to predict the prevalence of non tested people, we can conclude that national population‐based surveys can provide quality and representative national HIV prevalence estimates.