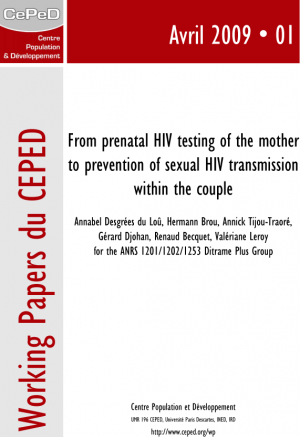 The first step of prevention of mother-to-child HIV-transmission (PMTCT) programmes is offering HIV couselling and testing to pregnant women. In developing countries where HIV-testing remains rare, it represents a unique opportunity for many women to learn their own HIV status. This prenatal HIV testing is not only the entry point to prevention of mother-to-child HIV transmission, but also an occasion for women to sensitize their male partner to sexual risks. We explore here if these women, HIV-tested as mothers, apply the prevention recommendations they also receive as women.

In the Ditrame Plus PMTCT program in Abidjan, Côte d’Ivoire, two cohorts of women (475 HIV-infected women and 400 HIV-negative women) were followed-up two years after the pregnancy when they were offered prenatal HIV testing. In each cohort, we compared the proportion of women who communicated with their regular partner on sexual risks, prior to and after prenatal HIV testing. We analysed sociodemographic factors related to this communication. We measured two potential conjugal outcomes of women HIV testing: the level of condom use at sex resumption after delivery and the risk of union break-up.

Prenatal HIV testing increased conjugal communication regarding sexual risks, whatever the woman serostatus. This communication was less frequent for women in polygamous union or not residing with their partner. Around 30% of women systematically used condoms at sex resumption. Among HIV infected ones, conjugal talk on sexual risks was related to improved condom use. After HIV testing, HIV-infected women separated more from their partner than HIV-uninfected women, despite very few negative reactions from the notified partners.

In conclusion, offering prenatal HIV counselling and testing is an efficient tool to sensitize women and their partners to HIV prevention. But sexual prevention in a conjugal context remains difficult and need to be specifically adressed.