Prenatal HIV counselling as an opportunity to reach men? Conjugal relationships and gender norms in the context of the Prenahtest ANRS 12127 trial 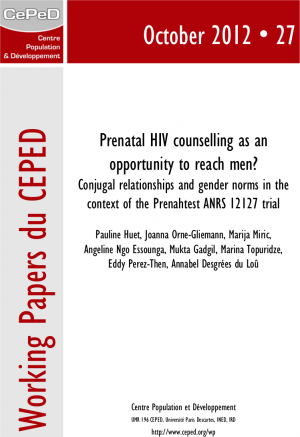 In the context of the worldwide initiative towards the elimination of mother-to-child transmission of HIV (MTCT), renewed efforts are being made to increase the availability of prenatal HIV testing. These could be seized as an opportunity to increase the overall coverage of HIV testing and to improve the involvement of men in PMTCT. Within the Prenahtest ANRS 12127 trial conducted in Cameroon, Dominican Republic, Georgia and India, a couple-oriented HIV counselling (COC) intervention was delivered to pregnant women, to help them discuss sexual risks and HIV prevention with their male partner, and bring him to HIV testing during prenatal care. Based on in-depth interviews and on published scientific literature, we describe couple relationships and gender roles in the four study sites and explore how these may have enabled or constrained the success of the COC intervention. Three elements were identified as facilitating men’s involvement in prenatal HIV counselling and testing: the implication of a health worker as a third and professional voice between husband and wife; the appeal to men’s responsibility as fathers for the baby to be born; and a “male-friendly” organisation of prenatal services. Men can be involved in PMTCT and prenatal HIV counselling and testing when services are adapted to both gender norms and cultural contexts.