Skewed sex ratios at birth and future marriage squeeze in China and India, 2005-2100 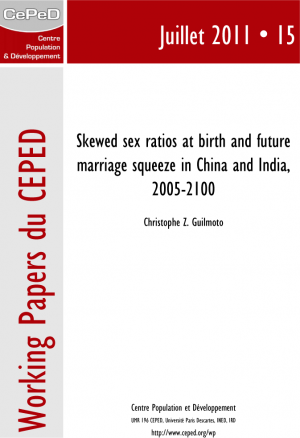 This paper examines the potential impact of the anticipated future marriage squeeze on nuptiality patterns in China and India during the 21st century. We use population projections from 2005 to 2100 based on three different scenarios for the sex ratio at birth (SRB). Due to the limitations of cross-sectional methods commonly used to assess the severity of marriage squeezes, we use a two-sex cohort-based procedure to simulate marriage patterns over the 21st century based on the female dominance model. We also examine two variants based on delayed male marriage and on the harmonic mean model respectively to illustrate the potential impact of changes in marriage schedules as a response to the marriage squeeze.

Longitudinal indicators of marriage squeeze indicate that the number of prospective grooms in both countries will exceed that of prospective brides by more 50% for three decades in the most favorable scenario. Rates of male bachelorhood will not peak before 2050 and the squeeze conditions will be felt several decades thereafter, even among cohorts unaffected by adverse sex ratio at birth. If the SRB is allowed to return to normalcy by 2020, the proportion of men unmarried at age 50 is expected to rise to 15% in China in 2055 and to 10% in India in 2065, and the marriage squeeze will remain perceptible until 2100. India suffers from the additional impact of a delayed fertility transition and its impact on age structures.

The application of alternative nuptiality models indicates that delayed male marriage represents a partial, but sociologically more plausible response to the forthcoming marriage squeeze. An additional one-year delay in male marriage would lower the male singlehood rates at age 50 by about 2%, resulting in a considerable reduction of the numbers of men unable to marry. We conclude the paper with a synthesis of the results and a discussion of some implications of our findings.